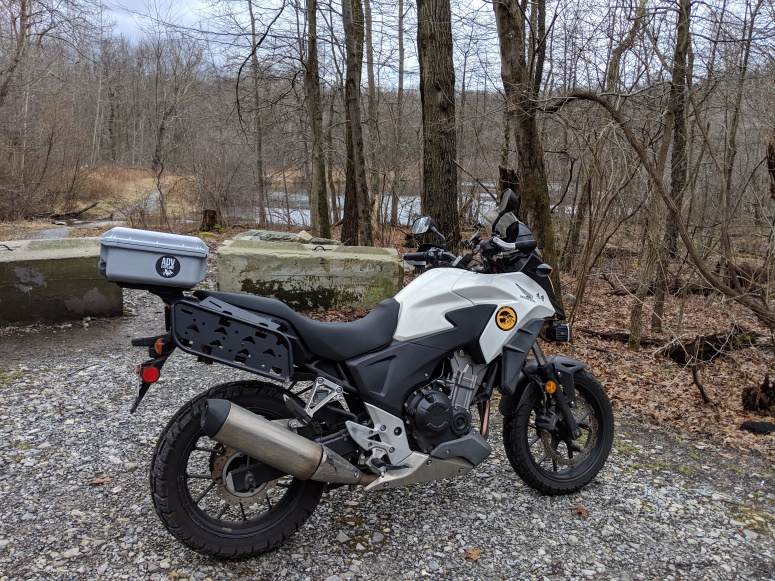 January started with mild weather, a nice ride in the Frederick Watershed opened the year on New Years Day. The 6th brought was the first Bikes and Breakfast, I unfortunately had an off on the way home which required some repairs but offered the opportunity for some improvements. A new center fairing, brake and clutch pedals, handlebars, and some new foot pegs along with a skid plate from Rally Raid were installed by the 15th. 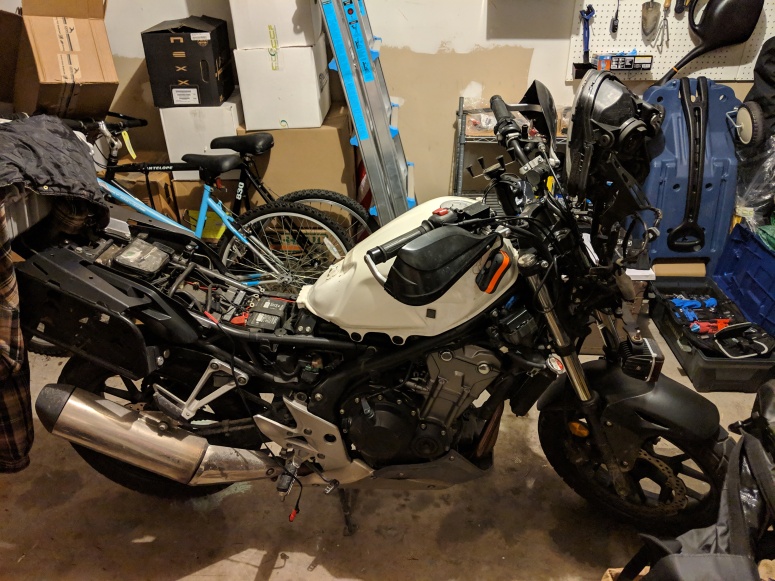 February found me back at Bikes and Breakfast on the 3rd, this time the ride home was far less eventful. Later in the month was the DC IMS and winter weather afforded me some time to write and post reviews of the Klim Vanguard GTX Short Gloves and Fieldsheer Hydro Heat Jacket.

March brought the return of warmer weather, a ride for ice cream, and I picked up my LS2 Subverter. Doug and I started to plan for a MABDR ride.

April had even better riding weather, my first experience changing out fork fluid, another Bikes and Breakfast, and on the 20th Doug and I took a day ride around central Maryland.

May began with one very damp Bikes and Breakfast. But I was able to start messing around with video and uploaded my first few posts to YouTube. I also attended the Royal Enfield Pick Your Play event at Summit Point Motorsports Park. Riding the new 650s and the Himalayan was a great experience.

June was pleasant weather wise, but not overly eventful; I received a copy of the MABDR map for father’s day and got out to Bikes and Breakfast on the 16th. Towards the end of month, my rear shock started to fail after close to 24,000 miles. 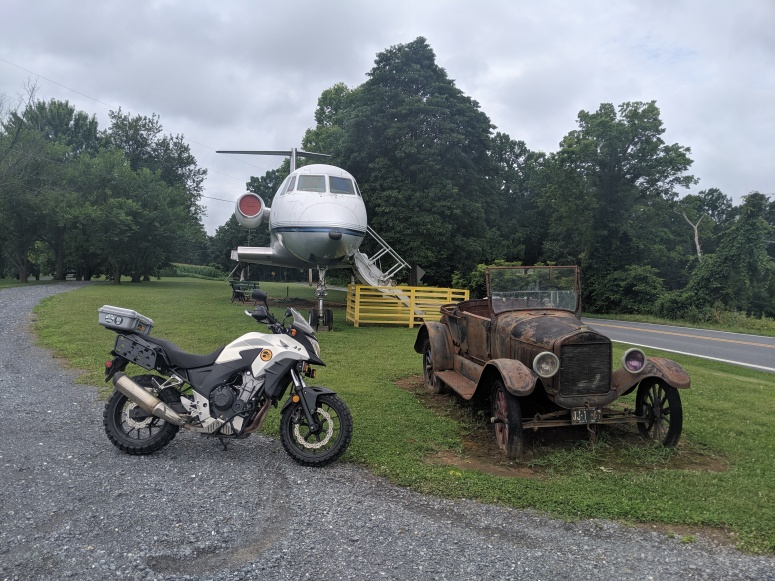 July was a crazy month. I started by finally swapping out my last set of Shinko 705 tires for the 805/TKC80 combo on the CB500X. Jude and I went to our first flat track race, the Barbara Fritchie Classic, on the 4th of July. I rode to the CB500X’s last Bikes and Breakfast on the 7th, and met up with some friends on the 14th for a ride and tour of Gettysburg. I test rode a 2019 Tiger 800 XCA on the 26th which I subsequently traded in the CB500X for on the 31st. 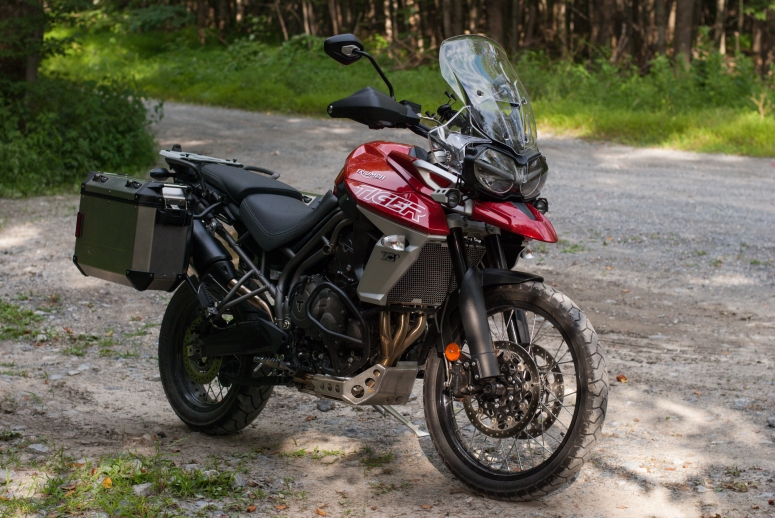 August was another busy one. I was riding the new Tiger every possible opportunity, attended Bikes and Breakfast on the 4th, and posted my 1000 Mile Review to YouTube on the 8th. Some friends and I rode Skyline drive on the 14th, and I closed out the month with my first article in the Sept/Oct issue of ADVMoto Magazine.

September saw two more Sunday morning Bikes and Breakfast rides, installation of Hepco and Becker crash bars on the Tiger, and an excursion up to Michaux State Forest in PA.

October was spent preparing for and hosting a ride with friends from the Cafe Racer Podcast slack group. We rode west from Frederick, MD through Burkittsville, MD; Harpers Ferry, WV; to Berkeley Spring, WV. After lunch we headed north to Hancock, MD and worked our way back east to Thurmont, MD then south to finish in Frederick. My friend Scott down in FL kindly produced a series of nine videos which are available on his channel, Amen Moto, as well as Maryland Moto, Moto Chiba, and Jedz Moto. I closed out the month with one last easy access ride in the Frederick Watershed before they put up gates to reduce usage.

November ushered in cooler temperatures; a Bikes and Breakfast, some new turn signals, and a gift of a gremlin bell from Scott and Doug were the high points.

December has been again, fairly hectic but I managed to get to the last Bikes and Breakfast of the year and a couple of great adventure rides with Jesse. On the 15th we left Bikes and Breakfast and headed into VA via White’s Ferry, explored some dirt roads between Leesburg and Point of Rocks, got some ice cream, and did some tiny wheelies on the undulating country roads back to Frederick. Our ride on the 28th was far more involved. We headed out to Green Ridge State Forest and both found the limits of our 90/10 tires in mud before sitting down for a lunch that took way too long and high speed slabbing it home. 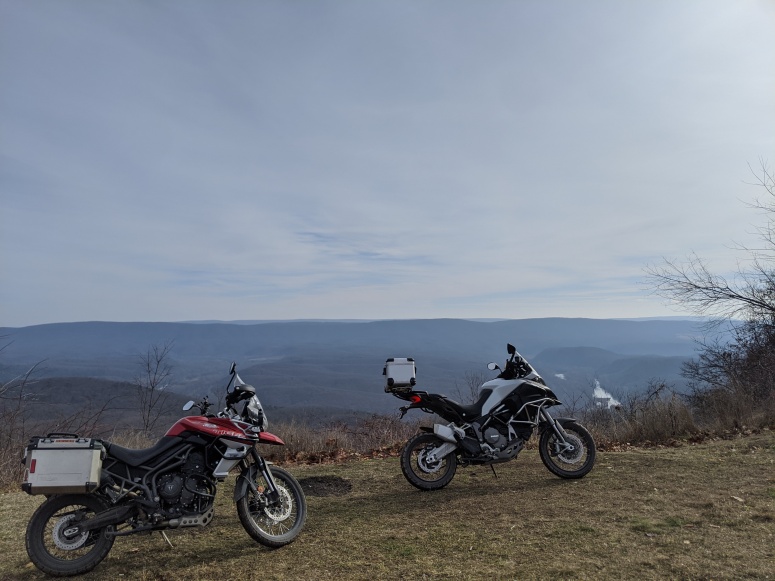 2020 will be here in less than 36 hours but I’m already looking forward to a few things. To kick off the new year, I’ll start working for ADVMoto as their Web Editor in addition to my full time job. Things will be a bit busy but I’m absolutely thrilled to take on the additional responsibilities and learn this new role. My riding goals are to check out the abandoned PA Turnpike Tunnels, ride the graffiti highway in Centralia, and attend at least one adventure rally or dual sport ride. With luck I’ll also finally put together a group for the MABDR and/or NEBDR. My postings here and on YouTube will likely continue to be relatively sporadic but keep an eye out on Instagram for anything I’ve got coming up.